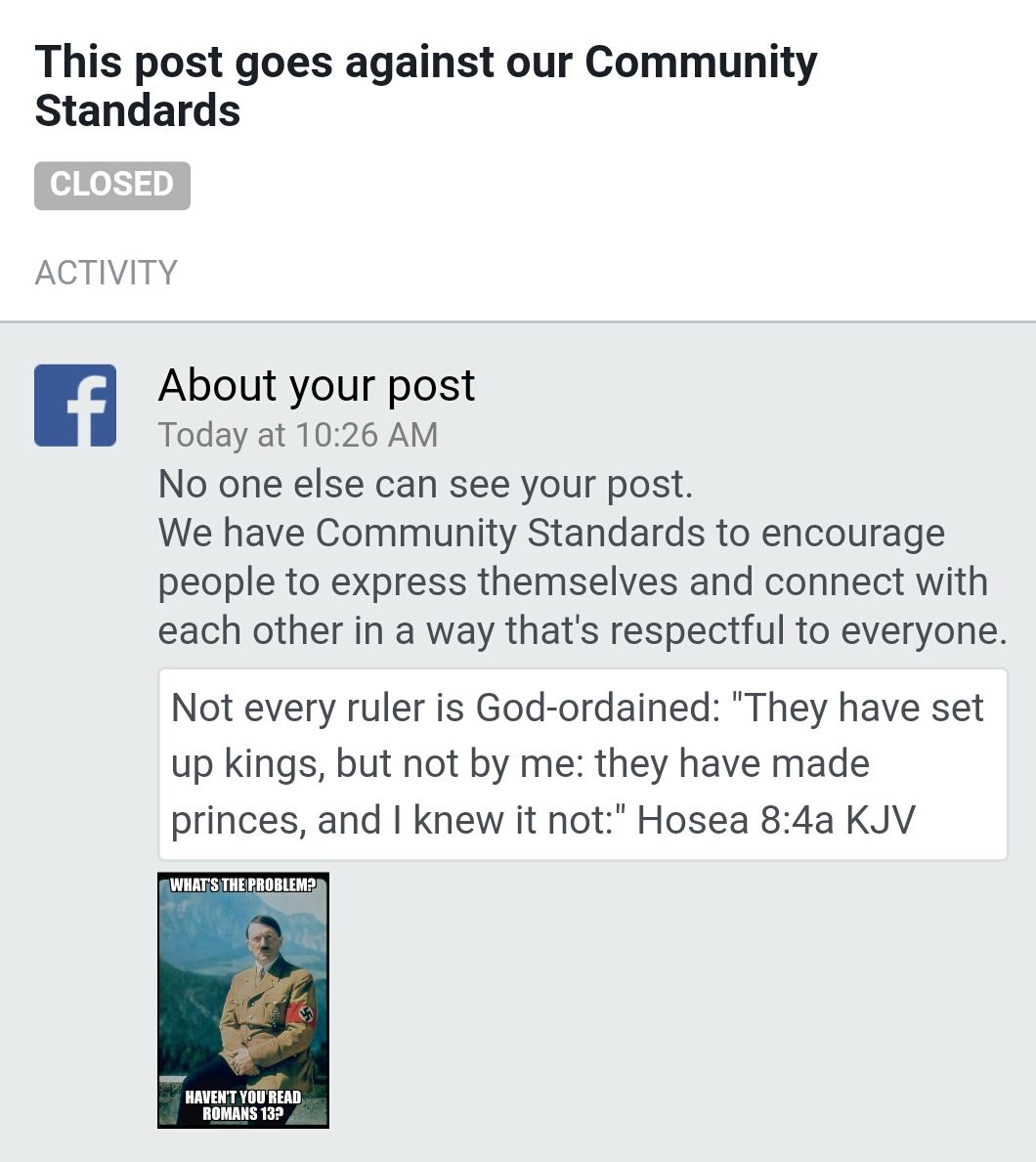 It was meant as a response to Christians who believe that all leaders, including Donald Trump, are put into power by God. Hosea 8:4a is one of many scripture verses showing that the Bible does not teach this.

Tyrants like Adolf Hitler have used Romans 13 to tell people that God expects them to submit to all governmental authority, no matter how immoral or unjust. Apparently, the idiots at Facebook thought this was not "respectful to everyone", deleted the post and suspended me from Facebook for 24 hours.

And lest you think that it was just a stupid algorithm designed to flag all images of Hitler as disrespectful, I went through their dispute process and explained to them that my post did not support Adolf Hitler, but quite the opposite. Yet after reviewing my dispute, they still decided against me.

Even if the post had been supportive of Hitler, it should not have been censored. But we need to understand that we have no First Amendment right of free speech on Facebook. There is no guaranteed freedom of expression. Facebook will decide what you can or can't say, just as if you lived under a totalitarian government. No matter how arbitrary or absurd their rules may be, we have no choice but to submit.

Keep in mind that your entire account can be removed at their whim. You could lose all your content if you haven't backed it up. And you could lose the ability to contact all your friends unless you've shared alternative contact information with them.

Also keep in mind that Facebook owns Messenger, Instagram and WhatsApp. They could possibly compromise your freedom of expression or your privacy on those platforms as well.

It's ironic that Facebook has so much in common with the Hitlerian authoritarianism that they profess to hate.

But I would like to remind everyone that the Internet has been around much longer than Facebook. There are two other ways to connect with other people without using these tyrannical social media platforms: email and websites.

I predict that unless there is some kind of an uprising and people start dumping Facebook, authoritarians like Mark Zuckerberg will continue to tighten the censorship until Christians are forced to decide whether they will compromise the truth or whether they will be faithful to God's truth.

Having your own private email and web domain is not as expensive as you might think. I've seen web and mail hosting services for as little as $5 a month. Some are based offshore in countries where privacy laws are stricter than in the U.S. If you're active online commentator, I recommend you prepare yourself so that when censorship ramps up even more, you'll have an alternative way to communicate.